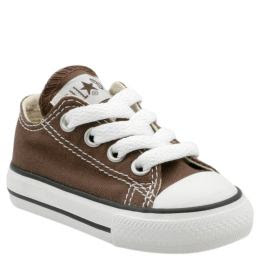 Is this not the cutest thing ever? Little baby converse shoes....I am tempted to pay the $25 for a pair for Zachary - just WAY TOO CUTE!
Posted by Dustin and Jen Gray at 10:28 PM 0 comments

yuck - they ate what? 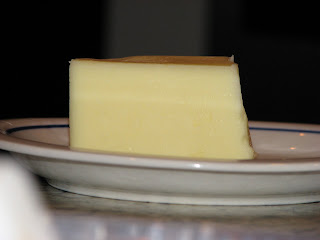 This plate of butter has been sitting on our counter since Thanksgiving (Thursday). We just noticed that the left side of this stick of butter has a bunch of LICK MARKS on top of it....yes OUR CATS HAVE BEEN EATING BUTTER! It's that just gross? Needless to say - this butter has gone in the trash.

One tradition we decided to start when we got married is that we get our live Christmas tree the day after Thanksgiving - that way we can enjoy the Christmas "feeling" for a good month. So today we fired up the 97 Chevy (Dustin's dad's truck that we have been babysitting here in Utah) and headed up to Farr West, Utah. Why the 60 mile drive you say? Believe it or not - that is the only place online we could find that has live Christmas trees you can cut down. This family owns some land and they grow them so people can cut them down for Christmas. We went to the same place last year and thought the selection of trees and price was very reasonable. Believe it or not - the taller the tree the cheaper it is.....so of course we had to go for the cheapest and get something at least 10 feet tall!

Zach and Dustin ready the hunt for our perfect Christmas tree! 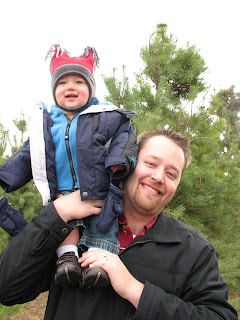 You can see how serious of an event this was.... 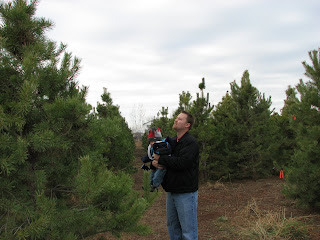 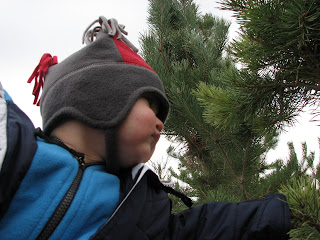 Our 11 foot or taller TREE! Dustin and Glen cutting it down 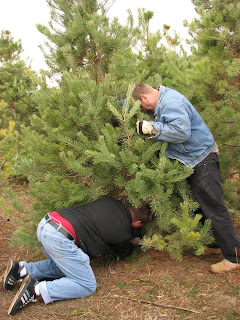 Loading the tree onto the "tractor" back to our truck 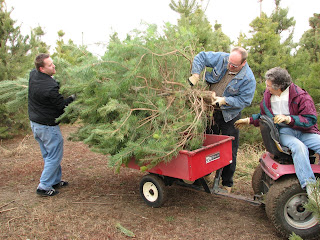 Loaded onto the 97 Chevy...man look how tall it is! 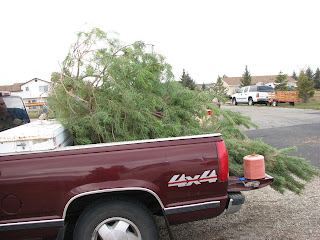 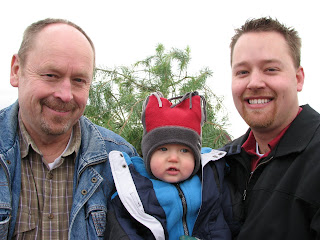 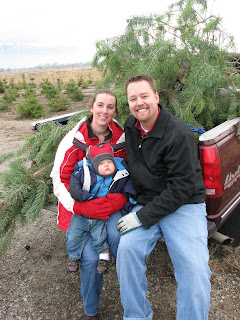 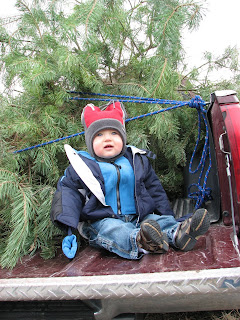 Posted by Dustin and Jen Gray at 7:32 PM 0 comments

Have you ever done anything on this list? I saw this on a friends blog thought I would give it a try....feel free to copy and post too! The red ones are my (Jen) accomplishments so far in life!

1. Started your own blog
2. Slept under the stars
3. Played in a band
4. Visited Hawaii
5. Watched a meteor shower
6. Given more than you can afford to charity
7. Been to Disneyland
8. Climbed a mountain
9. Held a praying mantis
10. Sang a solo
11. Bungee jumped
12. Visited Paris
13. Watched a lightning storm at sea
14. Taught yourself an art from scratch
15. Adopted a child
16. Had food poisoning
17. Walked to the top of the Statue of Liberty (been to it, was unable to go to top)
18. Grown your own vegetables
19. Seen the Mona Lisa in France
20. Slept on an overnight train
21. Had a pillow fight
22. Hitch hiked
23. Taken a sick day when you're not ill
24. Built a snow fort
25. Held a lamb
26. Gone skinny dipping
27. Ran a marathon
28. Ridden in a gondola in Venice
29. Seen a total eclipse
30. Watched a sunrise or sunset
31. Hit a home run
32. Been on a cruise
33. Seen Niagara Falls in person
34. Visited the birthplace of your ancestors
35. Seen an Amish community
36. Taught yourself a new language
37. Had enough money to be truly satisfied
38. Seen the Leaning Tower of Pisa in person
39. Gone rock climbing
40. Seen Michelangelo's David
41. Sung karaoke
42. Seen Old Faithful geyser erupt
43. Bought a stranger a meal at a restaurant
44. Visited Africa
45. Walked on a beach by moonlight
46. Been transported in an ambulance
47. Had your portrait painted
48. Gone deep sea fishing
49. Seen the Sistine Chapel in person
50. Been to the top of the Eiffel Tower in Paris
51. Gone scuba diving or snorkeling
52. Kissed in the rain
53. Played in the mud
54. Gone to a drive-in theater
55. Been in a movie
56. Visited the Great Wall of China
57. Started a business
58. Taken a martial arts class
59. Visited Russia
60. Served at a soup kitchen
61. Sold Girl Scout Cookies
62. Gone whale watching
63. Got flowers for no reason
64. Donated blood, platelets or plasma
65. Gone sky diving
66. Visited a Nazi Concentration Camp
67. Bounced a check
68. Flown in a helicopter
69. Saved a favorite childhood toy
70. Visited the Lincoln Memorial
71. Eaten Caviar
72. Pieced a quilt
73. Stood in Times Square
74. Toured the Everglades
75. Been fired from a job
76. Seen the Changing of the Guards in London
77. Broken a bone
78. Been on a speeding motorcycle
79. Seen the Grand Canyon in person
80. Published a book
81. Visited the Vatican
82. Bought a brand new car
83. Walked in Jerusalem
84. Had your picture in the newspaper
85. Read the entire Bible
86. Visited the White House
87. Killed and prepared an animal for eating
88. Had chickenpox
89. Saved someone's life
90. Sat on a jury
91. Met someone famous
92. Joined a book club
93. Lost a loved one
94. Had a baby
95. Seen the Alamo in person
96. Swam in the Great Salt Lake
97. Been involved in a law suit
98. Owned a cell phone
99. Been stung by a bee

Okay I feel like a bad parent for not noticing sooner! We were playing with Zach tonight and noticed tooth #5 fully broken through - it had probably been there for a couple of days (upper left side next to his front two teeth)....and tooth#6 is just now starting to break through on the upper right side . 10 months old and SIX TEETH!
Posted by Dustin and Jen Gray at 10:28 PM 0 comments

Who is this big guy?

We were walking around the mall - trying to do some Christmas shopping....and who was there? SANTA! He was already posing for pictures - and Thanksgiving isn't until next week. We couldn't resist having Zach take his very first picture with Santa. Zach kept turning and looking at Santa and pulling his beard.....ten snapshots and $24.99 later - here is our picture to remember: 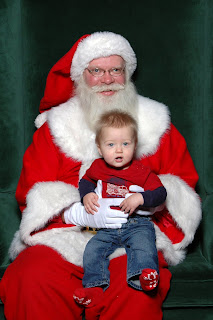 This was as close to a smile we could get - it was already about an hour past Zach's nap time....and he was ready to crash.
Posted by Dustin and Jen Gray at 6:38 PM 1 comments

Jen has been working with Dustin's Aunt Pat on some sewing projects and here is the result. We think it turned out pretty good! 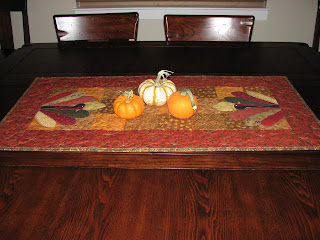 It is table runner...and we are making use of the left over pumpkins from Halloween :)
Posted by Dustin and Jen Gray at 9:10 PM 1 comments

Gas at our Costco has finally fallen under $2.00!!! Regular unleaded was $1.92 a gallon today - I don't think it has been that low for at least a year. Now if only our 401K's would magically gain back the 30% they have lost so far this year!
Posted by Dustin and Jen Gray at 8:54 PM 1 comments

What would you do if someone in your neighborhood just finished putting up their Christmas lights? Yes - on November 11th! Bah humbug is what we say! It DRIVES US CRAZY when you walk into a store and they have Christmas decorations up in August, or Valentines candy out the day after Christmas...can't we just enjoy one holiday at a time?! Here are the rules we agreed to:

We have found that doing it this way helps us enjoy each and every holiday...and doesn't allow for us to "skip" one. As for the house in my neighborhood - they must not be celebrating Thanksgiving this year!

Posted by Dustin and Jen Gray at 9:24 PM 3 comments

I've been tagged with a few different things...this one seems like the "easiest" for me to do....so here it goes! This is Jen by the way.....finding something else to do besides blog on our recent vacation...time has been short the past few days!

Five things I was doing 10 years ago:
1- Recovering from a concussion due to a nasty rollerblading accident.
2- Starting my junior year of engineering school at BYU.
3- Grading math department student homework to pay for groceries.

Sad...but I can only think of three things....I guess that is/was the life of a college student!


Five things on my to do list today:
1- Blog about Tahoe vacation
2- Go grocery shopping
3- Make lunch/dinner menus
4- Pick up the house after my unpacking tornado
5- Take down the Halloween decorations

Interesting that none of this things got done today....

Five of my favorite snacks:

Five Things I would do with a million dollars:
1- buy a sportscar
2- buy a new wardrobe
3- travel
4- pay off our parents homes
5- put the rest in savings

Five things that made me laugh this week:
1- Zach learning to "growl" from his cousin Scott.
2- Someone mistaking my nephew for a girl because he was pushing a baby pink stroller around. 3-Actually winning some money from slot machines in Lake Tahoe.
4- Watching Zach dance in his highchair to the music playing at a Mexican resturant.
5- The way Dustin made our suitcases "stretch" to get all our stuff back from California.

Posted by Dustin and Jen Gray at 9:29 PM 0 comments

We left this morning and headed to California (by plane of course) for a week vacation at Lake Tahoe with Jen's family. We just checked into our resort...and this place is AWESOME! We had two SUV's loaded up with our gear/food (it is a condo we are staying at) and when we arrived this evening we were greated by the valet - who quickly unloaded both vechiles and took all our stuff up to our rooms....now this is a vacation! If you are ever in Tahoe - I highly recommend Marriott Timber Lodge! More post to come as the week long vacation plays out!
Posted by Dustin and Jen Gray at 8:23 AM 2 comments