Some know…..some don’t. We haven’t spread the news intentionally – just to make sure we had two thumbs up…today we got the two thumbs up!

So far so good. Morning sickness lasted from week #6 through week #9. Jen is still super tired. Her thyroid TSH levels are normal ….but her thyroid antibodies are way elevated. The antibodies were elevated with Zachary, but this time they are even higher (normal is <35, 1st pregnancy it was 900, this pregnancy it is 4,100) – hence part of the reason we held off spreading the news until week #12….with high thyroid antibodies a woman is twice as likely to have a miscarriage. Also if a pregnant woman has a known autoimmune thyroid disease (in Jen’s case Hashimoto’s thyroiditis) the baby may be at risk of thyroid dysfunction since thyroid antibodies can cross the placenta and cause hypothyroidism or hyperthyroidism in the fetus or newborn (apparently it doesn’t happen very often, but they still watch for it). So what does this all mean??? Extra ultrasounds – our 20 week ultrasound will be with a perinatologist. We saw a perinatologist at week #28 with Zachary’s pregnancy too. Jen is also more likely to develop pre-eclampsia (like the last pregnancy) and will most likely not carry to week #40 (so we may have a Christmas baby on our hands). This one will be delivered via a scheduled C-section as well.

We are excited – still a bit in shock – but excited. Zachary is such a keeper we want to have another one just like him! I guess we will be saving some money too….the Fall Hawaii trip is on hold…and the April 2010 Caribbean cruise is also on hold.
Posted by Dustin and Jen Gray at 8:32 PM 2 comments

We were shopping at Target and were looking for a "fort" for Zach. We found this tunnel that attaches to a fort. Target was out of the fort, but had the tunnel. Jen figured she would just get online and buy the fort since the store was out......guess what.....the item was discontinued and no longer carried online. No store in Utah had any in stock - BUT - there was a store near Jen's parents in California that had "limited availability".....Grandma and Grandpa Twogood to the rescue! Two days later Fort Zachary arrived in the mail and the ultimate kid-dome was complete. Zach and Dustin did find ways to have fun with the tunnel for the couple of days we didn't have the fort to go with it! 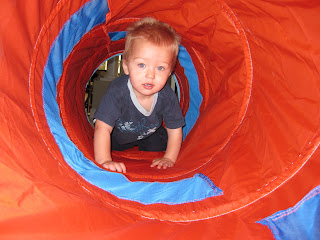 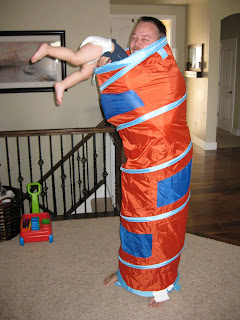 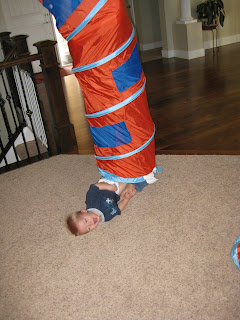 Posted by Dustin and Jen Gray at 9:33 PM 1 comments

I think we have had our fair share of rain storms this month! Zach seems to be enjoying it.... 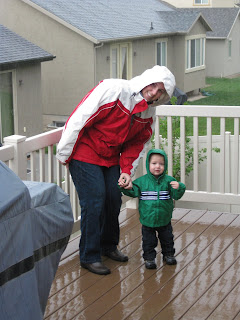 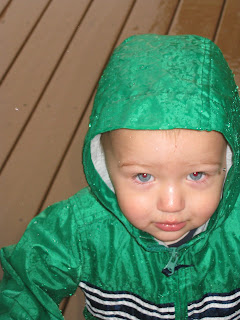 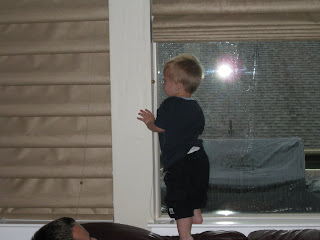 Posted by Dustin and Jen Gray at 9:29 PM 0 comments

We bought one of those bubble making machines. How can you resist when they are only $10 and the amount of bubbles the thing spits out in just a few seconds is amazing...especially when kids can't keep up with all the bubbles :) Zach has been loving this bubble machine and now knows how to turn it on. He also started to say the word "bubbles".....so tonight when was walking around the house saying "bubbles" we took him outside to play with the bubbles. We learned tonight that Zach apparently can dance on demand now. If you say "shake it" or "dance" he proceeds to twist his body back and forth and dance. Pretty dang cute. So I am sure our neighbors got a good laugh of us having a dance party on our front lawn with a million bubbles floating around. How is that for Friday night entertainment?
Posted by Dustin and Jen Gray at 11:41 AM 0 comments

Salt Lake has a soccer team - the REAL Salt Lake (pronounced REE-ALL). Our friends Jeff and Kristin have season tickets. They couldn't use their tickets this weekend and kindly offered them to us. Grandpa Gray was more than willing to babysit (game started at 8pm - kind of too late for Zach to go). We had a great time!

They "dedicated" the new stadium (that was finished October 2008) before the game - they had the air force drop some sky divers down - one was even carrying the American flag! 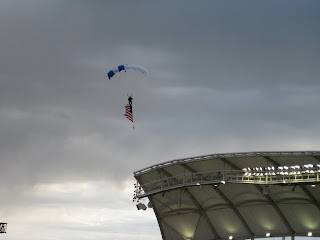 Then they had this whole "Charity starts at home" theme going. So David Archuletta sang the National Anthem and was hosting a concert at the end of the soccer game. The boy can sing, but we opt'd not to stay for the concert - too many high pitched screaming teenage girls were in attendance and we feared for our hearing.

The game was awesome. Salt lake started the second half by scoring the first goal of the game. Unfortunately - Colorado was able to also score a goal in the last 5 minutes of the game. So it ended as a tie 1-1.

Dustin was in charge of pictures during this date and here are the snap shots he keeps laughing about: Notice the lady behind Jen? Dustin took this picture and then when he looked at it on the camera he started laughing out loud. He showed Jen the picutre and Dustin kept looking over at the lady next to Jen and laughing. The lady caught on we think...because she proceeded to change her seat. The reason Dustin was laughing is the look on the lady's face is her normal look...she didn't pose. 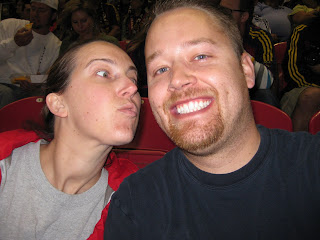 Dustin tried to get a "couple shot" and Jen tried to sneak a kiss for the picutre. She was a bit too late but Dustin couldn't stop laughing about Jen's eyes in the picure.
Posted by Dustin and Jen Gray at 11:48 PM 0 comments

Someone had a birthday today! We won't reveal the new age.... 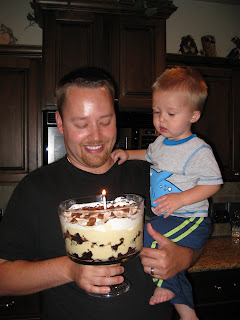 We enjoyed a nice dinner out and relaxing evening. Thanks to everyone for the birthday wishes.

Here is a snap shot of Dustin and Zach one year ago today: 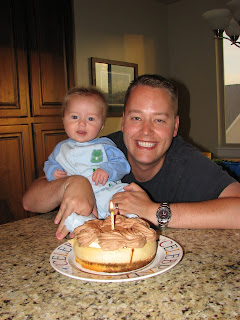 Posted by Dustin and Jen Gray at 8:57 PM 3 comments