What a kid remembers....

Today Zach told us he wanted to go to Chuck E. Cheese to ride the jeep. We were a bit shocked because the last time he was at Chuck E. Cheese it was about ten months ago.....and he hasn't mentioned the Chuck E. Cheese jeep in the last ten months. So we decided, what the heck...and made an afternoon of it.
We started off with the pizza lunch/dinner and watched a bit of the 'show'.......Zach had this puzzled, unsure, "what the heck are they doing" look on his face for most of the show: 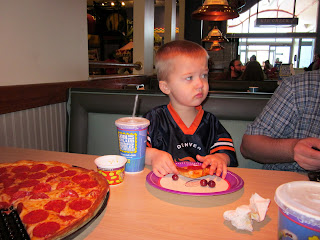 Logan on the other hand enjoyed every minute of it. He ate every piece of food we gave him and LOVED watching the show...he even gave Chuck a high 5! 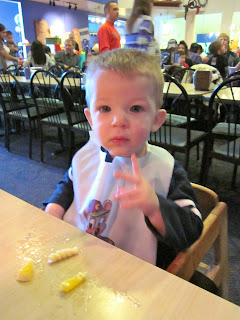 Now down to the nitty gritty...the JEEP! It is big, and it has hydraulics..it moves up and down. Zach loved it, Logan hated it (see his eyes - they are searching for MOM to get him OFF the thing!). 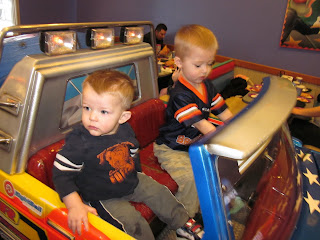 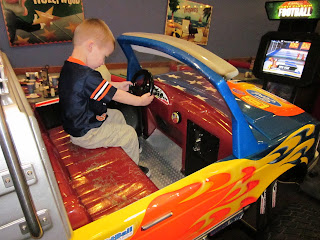 Zach rode this jeep over and over and over again. Once other kids started lining up to ride it - we had to convince Zach there were other "cool" games/rides around. Logan on the other hand found his "dream car"...this one was a bit more his size and only moved back and forth. He was so proud he could get in and out of it by himself! 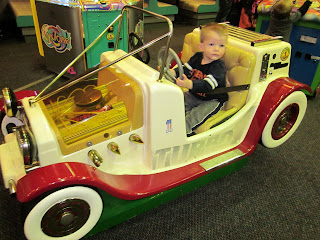 I bet it will be LESS than ten months this time before we head back to Chuck E. Cheese to ride the jeep again!
Posted by Dustin and Jen Gray at 8:48 PM 0 comments

Zach as been coming into our room in the middle of the night for a couple weeks now....and we are TIRED OF IT! We got to talking and decided....maybe the toddler bed he currently has just isn't comfortable anymore. We had an extra twin box spring and mattress in our storage room, so we busted it out and told Zach this was his new "big boy bed" (also a bribe to speed up that potty training). Fingers crossed this keeps him in his own room at night moving forward! 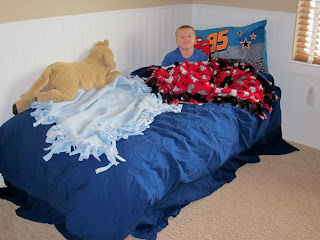 Right now the box spring and mattress are just sitting on the floor. At some point we will get a headboard/footboard...but no rush right now.
Posted by Dustin and Jen Gray at 8:40 PM 0 comments

It was cold an snowy this weekend...and we were all itching to get out of the house. So we decided to use our Thanksgiving Point membership and go back to the Dinosaur Museum. Zach always loves going to this place, and this will be the first time Logan will be able to walk around on his own in the museum! Being that both kids were mobile - Dustin took Zach and Jen took Logan....once inside the kids pretty much went opposite directions. Since Jen had the camera - we have LOTS of pictures of Logan exploring and not too many of Zach. Here is the ONLY picture we have of the kids together... 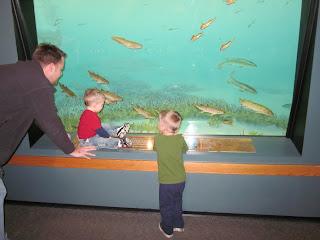 Jen pretty much let Logan walk around and explore things on his own. It was quite interesting what Logan spent time doing. He apparently LOVED this bench... 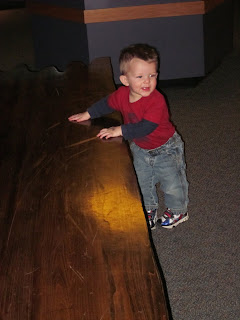 ...he also enjoyed all the hands on exhibits.... 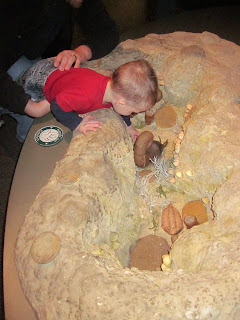 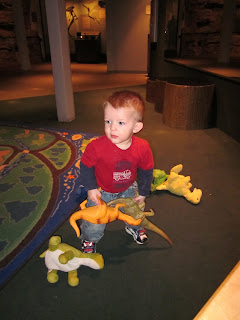 ...and of COURSE....he flirted with EVERY girl he came in contact with. 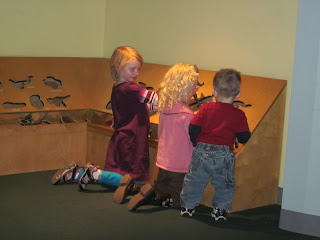 The boys keep asking to go back to the Dinosaur Museum...but is it for the dinosaurs or is it for the girls?
Posted by Dustin and Jen Gray at 8:28 PM 1 comments

Zach has been potty training. He wants to be left alone in the bathroom sometimes....and today it was taking a while. So we kept checking on him. At first he looked like this.... 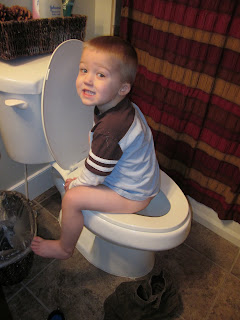 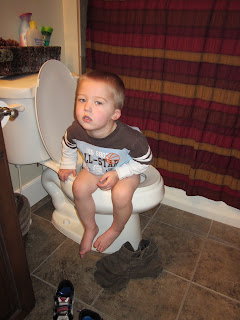 And finally in this position.... 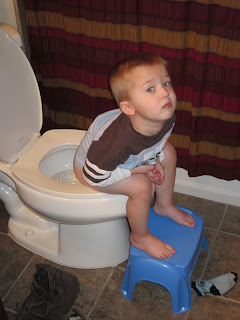 He was bound and determined to go in the potty to get his candy bribe :)
Posted by Dustin and Jen Gray at 7:21 PM 1 comments

Paperboy in our future

The weather was beautiful this weekend. Zach was DYING to spend some time outside. So I suggested Zach and Dustin go for a walk (Logan was napping, otherwise we all would have gone for a walk). They were gone for a while....when they got back Dustin informed Jen that Zach was a future paperboy. Apparently Zach decided that any newspaper that was in a homeowners driveway needed to be hand delivered to the porch. He did this for TWO STREETS in our neighborhood - no joke. 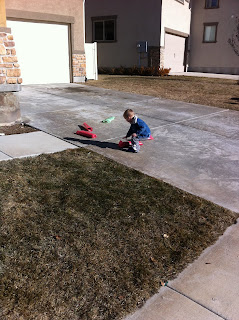 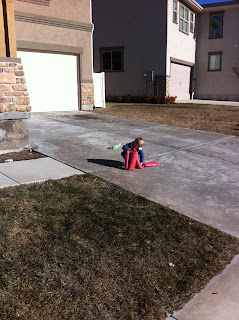 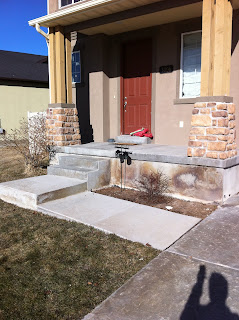 Posted by Dustin and Jen Gray at 3:19 PM 0 comments

Today Dustin was in a car accident in our beloved 11 year old 4runner. He was driving back to work after lunch and stopped on SR-92 for the construction traffic (they had people stopping traffic so large trucks/equipment could get on the road). Dustin was stopped, along with many other cars in front of him, for probably a full minute when all of a sudden - SMACK! Someone wasn't paying attention to the road (the driver at fault was actually "looking down"....guilty of texting?!) and he rear-ended Dustin going 40mph +. This pushed Dustin into the truck in front of him. He was "Oreo'd". The at fault driver had it the worst....all front air bags in his 1999 mini-van deployed. His front end was completely demolished from hitting the back of our 4runner (our hitch saved most our 4runner rear end!).... 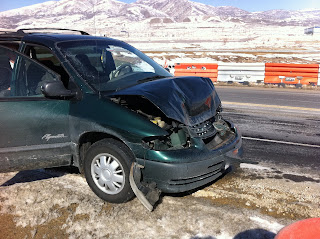 This mini-van basically smashed in our rear bumper, cracked the hitch, and buckled the bed internally. 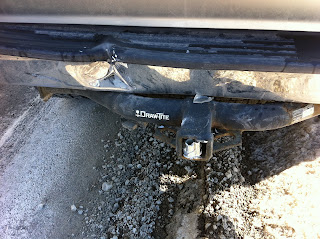 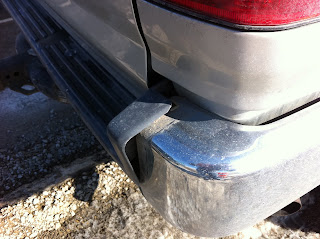 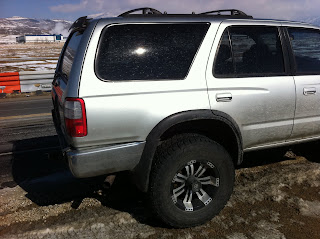 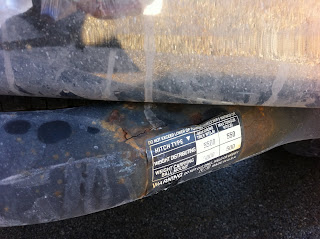 Now what about the front end? The man in front of Dustin was driving his MASSIVE 2008 truck - what saved his rear end? This big a$$ hitch! 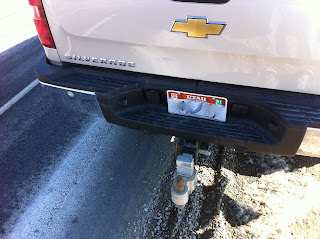 His only damage was this tiny dent in the bumper. 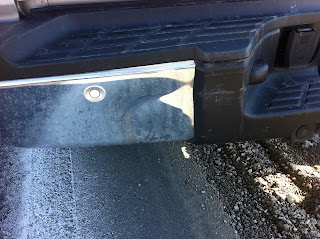 But that big a$$ hitch did this damage to the front end of our 4runner: 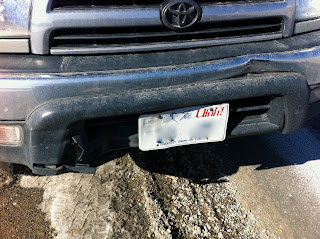 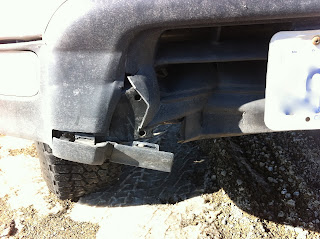 Dustin obviously suffered some whiplash. After the accident we visited the PA at work to have him checked out. The PA did confirm whiplash, but didn't seem to think there was anything worse. He ordered a spinal x-ray to be safe and for documentation. Dustin was sore and didn't want to do much sitting for the next three days, but after that he felt back to normal.
Our 4runner is fixable - $2500 fixable to be exact! Now we just have to deal with the joy of insurance companies (5 days after the accident and the one at fault has yet to call his insurance company to report the incident).
Posted by Dustin and Jen Gray at 8:49 PM 1 comments

Zach noticed that the "hub cap" on this car was broken...... 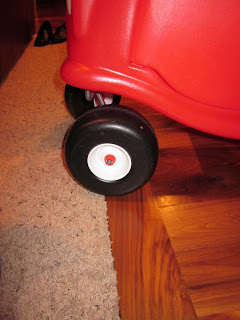 So today when were are in the store he conveniently picked out some new "wheels".... 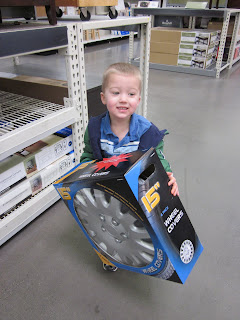 How do you tell a 3 year old that his new "wheels" won't fit his car?
Posted by Dustin and Jen Gray at 3:01 PM 0 comments