It has finally come time for Dustin to create his “man cave” – pimping out the garage. Dustin’s dad was in town and we hit him up for a weekend project – tape/float/sanding of the garage walls and priming and painting.

Day 1 - clearing out the entire garage, taking down existing shelves and bike hoists and the taping/floating the walls. This took from 9am until 4pm – both Dustin and Glen couldn't move their arms by the end of Saturday (it didn’t help Dustin came down with a cold Friday afternoon either). 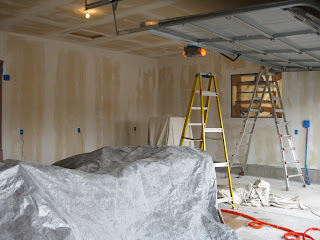 Day 2 – the day started at 9am and the walls were sanded, that took until about 1pm. Then quick trip to Lowe’s to buy primer and paint…and that is when our inner hillbilly started to shine. Everything that wouldn’t fit under a tarp was moved to our front yard – so that was a freezer, two mopeds, two bicycles, shelving, tools, garbage cans….here is the proof: 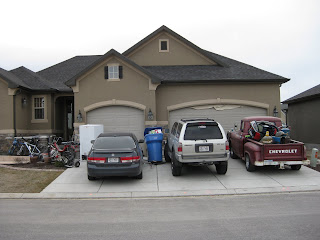 Then Glen’s airless paint sprayer wouldn’t work – the last person he lent it to didn’t apparently clean it and now it didn’t work…so off to Home Depot to rent one - $60 later a brand new paint sprayer sat in our driveway. The men get to work and an hour later we ran out of primer….so Jen headed back to Lowe’s (1 hour before closing) for another 5 gallon bucket of primer and Arby’s for the starving men. Two hours later the garage was finished for part #1! 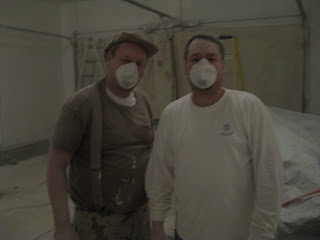 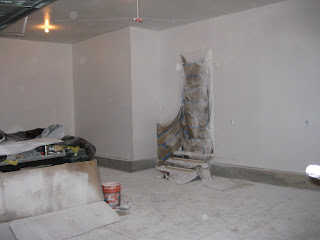 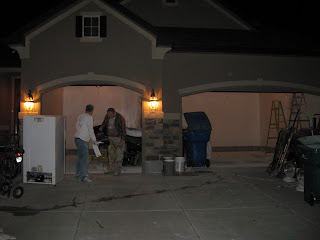 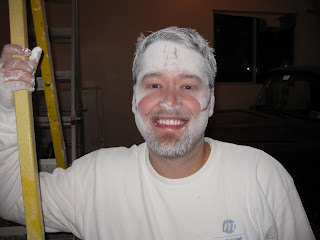