Go COUGARS Go!
Some co-workers were getting tickets to the BYU vs. CSU football game a few weeks ago and we decided to jump on the band wagon - we wanted to take Glen and Zach. Little did we know at the time they were buying tickets in the CSU visitors section...I guess we should have seen that coming since they were CSU alumni...but as it turns out that was the only place where tickets were still available in the whole stadium. Ironic - but yes, we did attend the BYU vs. CSU football game today and we did sit in the visitors section. Every time that football would get intercepted by BYU, the CSU quarterback get sacked and another touchdown for BYU would happen.....we would just look at each other and smile.
Most of the game had to be spent standing up...because apparently CSU students don't understand that the seats they were standing on were actually for sitting on. You would think that if your team was 20 points behind you would WANT to sit down....apparently not for CSU students. This was our seated view of the game: 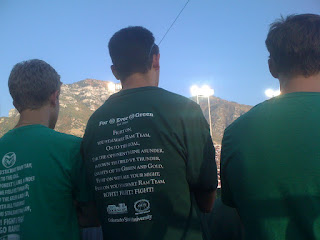 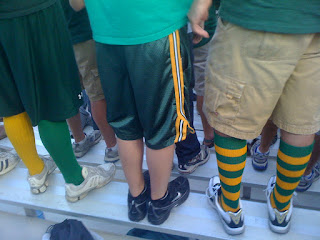