Our 2002 Mitsubishi  65" big screen (yes the old school box style) - tried to die on us recently. Being the engineer type that we are - we did some research and found other people with the same particular problem we were having (thank you google). The fix seemed simple - replace 7 capacitors on one of the boards. Well - Dustin and Jen are pro's at soldering from college and decided to take up the challenge. We hit up the local Radio Shack store to buy the capacitors....our grand total came to around $15. We had to plan the 'repair' time when the kids were down for naps today. It took Dustin longer to take the back of the TV apart and get the correct board out than it did to replace the 7 capacitors.

The black cap looking things are the capacitors that needed to be replaced. 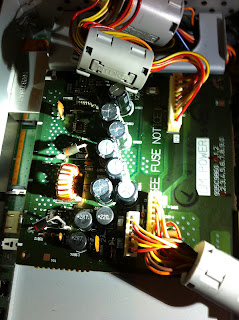 The blue ones are the new ones... 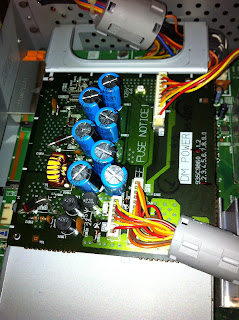 Dustin happy when then work was all done. 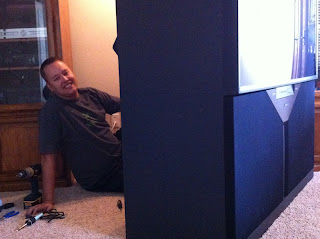