A trip to see Santa

We have been talking up Santa quite a bit the past couple of days in hopes of a tear free visit to the big guy. Last year Zach absolutely REFUSED to get anywhere near Santa for a picture. So this year we watched some movies with Santa in them, we showed him pictures of Santa on google, we even made it a point to talk about Santa with other kids and friends so Zach got the idea Santa was cool. Today was the big test.....we headed to the mall for the picture with Santa.
Of course there was a bit of a line, I think we waited about 30 minutes total. The kids were good as they could play with the other kids in line and watch what was going on. 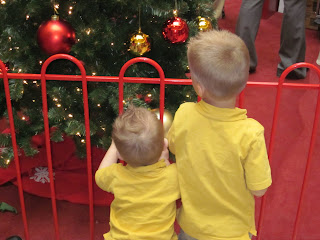 Zach was being Mr. Shy. He would hide behind his dad and would not crack a single smile. 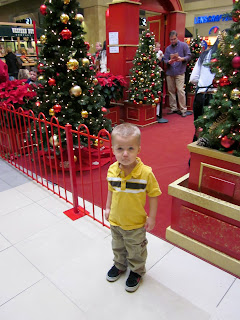 Logan on the other hand decided to flirt with Sophia.... 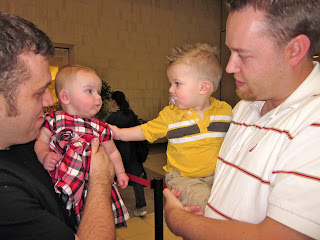 It final came our turn and Zach did sit on Santa's lap but wouldn't say a WORD, he wouldn't smile either. Logan on the other had starting screaming and CRYING the second he was put on Santa's lap. We were so worried about how Zach would react to a visit with Santa we never imaged that Logan would have issues. Needless to say...this was the best we got: 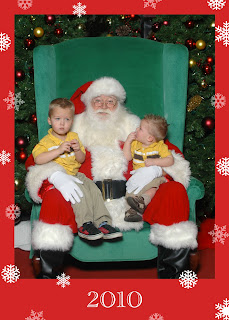 ...if you closely you can see a tear streaming down the side of Logan's face.
Posted by Dustin and Jen Gray at 5:59 PM