It was fun to see the kids reaction to Valentine's day this year. They had been learning about the holiday at daycare and preschool. Every where we went during the beginning of the month of February the kids would point out hearts when ever they saw them. Jen had taken Zach to the store earlier this month to pick out valentines and candy to pass out at both daycare and preschool. Zach picked out Transformers for himself and Dinosaurs for Logan...and the heart conversation candies.
This was the first 'holiday' where we had a party dilemma. Zach had a Valentine's singing program and party at the daycare center and Valentine's day party at preschool at the same time! Once we realized there was going to be a conflict we asked Zach what he wanted to do...he kept telling us he wanted to go to his preschool party. Then YESTERDAY he informs us he wants to go to BOTH parties. Now how do you swing that?
Our solution - attend the first half of the preschool party, then the last part of the daycare center party. Zach was happy - he was able to 'receive' valentines from both events...which is all he really cared about....getting candy :) When we picked the kids up after work today they were sporting these lovely bags, full of valentines and candy. 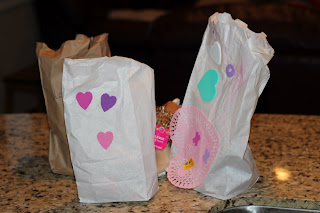 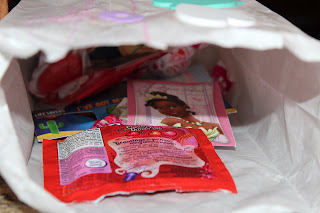 We thought it would be fun to get a heart shaped pizza for Valentines day dinner - seeing how the kids were paying attention to anything heart shaped. We called in our pizza to Papa Murphy's early so it would be ready when we got off work. We picked up the kids and headed over to get the pizza. Apparently everyone else in the area thought getting a heart shaped pizza was a great idea. The line to place new orders and pick up phone in orders were equally as long. Jen literally spent 20-30 minutes just waiting in line. So how did Dustin keep the kids entertained in the car in the parking lot? Well - remember those bags of valentines and candy? Lets just say most of it ended up getting consumed during that 20-30 minute wait! The kids were happy and excited for quite some time (sugar high!). The pizza ended up looking and tasting awesome of course once we made it home and baked it. 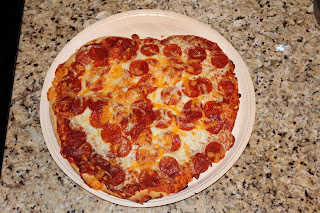 Posted by Dustin and Jen Gray at 9:57 PM