We figured that our first ER visit for a broken bone or stitches would always be for Logan.  He is the one that climbs on anything, has no fear and is extremely curious.  Well, today we had an emergency visit to the DENTIST for Logan...yes, 7pm on a Saturday night.  Looking back at all of it, Logan wasn't doing anything 'crazy'...this just happened to be dumb luck.

So you remember this? 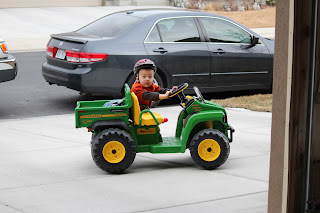 Yes, that is the motorized green 'dump truck' the kids got for Christmas.  We are responsible parents that require they wear bike helmets when they ride it.  We are NOT responsible parents for letting the kids sit down and ride in the back (the dump part) of the John Deere.  Zach was driving, Lily (neighbor girl) was the front passenger, Logan was in the back.  The kids had been riding for a while and Zach stopped the truck.  Jen went over to Logan and reminded him that he needed to hold on with both hands in a specific location if he was going to ride in the back.  Logan decided that he wanted to get out and stood up...Zach decided he wanted to drive....both these things happened at the same time.  So what do you think happens if your 2.5 year old is standing in the back of the dump when your 4.5 year old decides to start driving it?

Logan fell, face first onto the road.  Thankfully he was wearing his helmet, but somehow from the whole ordeal his left lateral incisor decided to come out - yes, the full tooth - root and all. 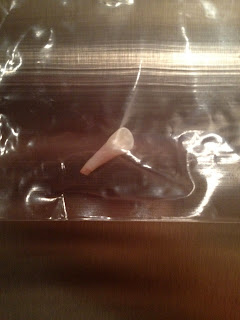 Lily's dad was outside chatting with us when this whole thing went down and ran over and found Logan's tooth immediately in the road.  Jen grabbed Logan and ran inside to stop the blood from coming out of his mouth and asses the damage.  Once Logan was able to get the blood flavor out of his mouth, he calmed down pretty quickly.  He chilled on the couch (trying to stick his finger in the hole where his tooth was), while we did some googling and made some phone calls trying to find a dentist that was available after hours.  Do we try and save the tooth, or just have him look like a pirate for the next 4-5 years until his permanent tooth comes in? 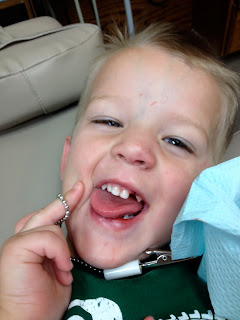 Dustin found a dentist in Orem that was available, he was actually already in the office working on another emergency patient.  We consulted him on what to do....put the tooth back in or just leave it out.  The first question he asked was, "how is your child's speech?"  Logan is delayed in is speech somewhat, he tries to say all the words we say but tends to keep his mouth shut while pronouncing them.  Apparently if you lose one of your four front teeth you have to "re-teach" yourself how to speak properly.  So the decision was made to try and re-implant the tooth.

We drove 20 minutes to his office.  Logan climbed right up in his chair, cuddled with his blanket and let the dentist do what ever he wanted.  The dentist numbed him up, he did cry a little bit.  The dentist proceeded to put the tooth back in the hole in Logan's gums.  The dentist then glued a wire on the tooth and secured it to the two adjoining teeth.  As you can see, Logan is still all smiles even with his little braces on. 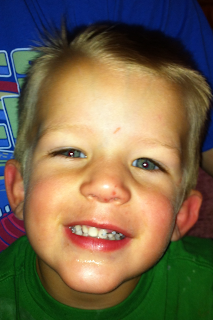 *update 10/3* The wire remained in place for 10 days, then was removed by the dentist and a 'mini' root canal performed to remove what ever dead tissue was left inside the tooth.  Once again, Logan was a trooper through the whole process.

Never a dull moment in the Gray house!