Smarter than you think...

Late tonight Zach was asking for a fruit snack - Dustin told him no because it was too close to his bedtime. Zach would not give up and kept yelling "SNACK!". Dustin told him, "well, there is a stool right there - move it yourself and get your snack". Zach quited down, which Dustin thought meant he gave up. About a half hour later it was time for Zach to go to bed...and off he went. A few hours later Dustin was cleaning up the kitchen and noticed this: 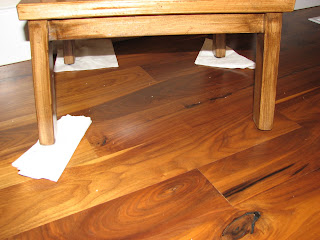 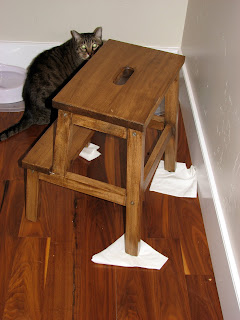 The stool has little rubber non slide pads on the feet, so it won't "slip" on the hardwood floors (enhancement added by Dustin). This makes it difficult for Zach to push the stool where ever he wants. Zach was so determined to get that stool over to the pantry to get his fruit snack that he FIGURED OUT THAT IF YOU PUT NAPKINS UNDER THE STOOL LEGS THE STOOL GLIDES EASILY ON THE HARDWOOD FLOORS! Our TWO YEAR OLD figured this out on his own. He got his own napkins from off the kitchen table and put them under the legs of the stool. He only managed to get 3 of the 4 legs done...and must have gotten bored, tired, or sent to bed before he finished.
So do you think we have a future engineer amongst us?
Posted by Dustin and Jen Gray at 9:49 PM