The past couple of years we have had some awesome 4th of July fireworks at our house. Dustin's brothers always drive here from Colorado (through Wyoming) and pick up some "nice" stuff - like $500-$600 worth of "nice" stuff. This year the "nice" stuff is LEGAL in Utah....but we still had them pick up fireworks on Wyoming along the way.
The first 4th of July party we hosted in Utah was pretty much just some relatives from Dustin's side of the family that live in the area. The second year it grew a bit bigger....the third year a bit bigger again. This year - our FOURTH year hosting a 4th of July party was the biggest bash we have ever hosted. We extended our formal guest list outside of just the relatives. We expected some of our guests to decline the invitation, thinking the would already have plans. NOPE. Everyone RSVP'd with a YES - and even brought some other "friends" with them! We were excited, we love to throw parties so the more merrier!
We decided to grill/smoke hamburgers, hot dogs, brats, salmon and some chicken. I don't think we realized it would take all day to prep and get things ready for a party of this size. We started at 10am to get the food marinaded, moving toys and chairs around...you name it we did it. Eight hours later the party began at 6pm. During the "prep" time the kids kept busy playing in the backyard. 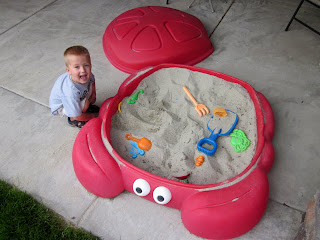 Check out the smoker hard at work! We smoked our neighbors ribs! 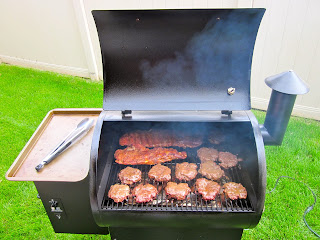 About 8:15pm we shut down the road (it is great having our neighbor who is a cop and the HOA president!) - we had people crowding around from all four sides! 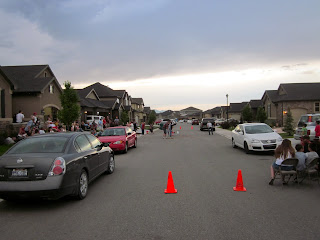 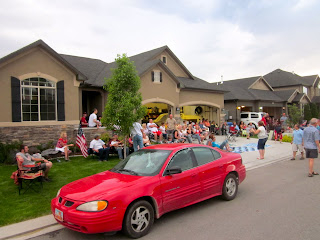 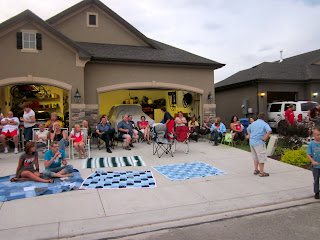 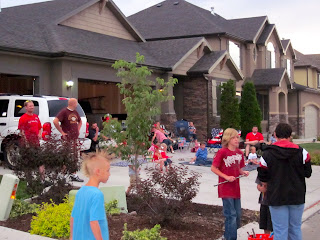 Zach really enjoyed the Roman Candles this year. He kept asking for MORE! 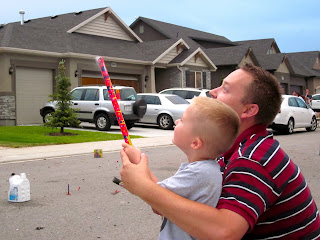 Eric and Jaren are the official firework engineers. They set up the big one and light them at the perfect time for a GREAT show! 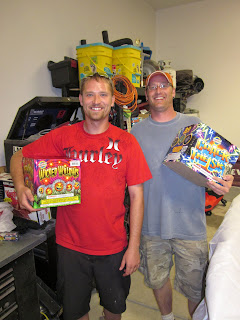 At 9:50pm we finished our show, just in time for Lehi City to start firing off fireworks from Thanksgiving Point at 10pm! Everyone just watched the show from our front lawn. 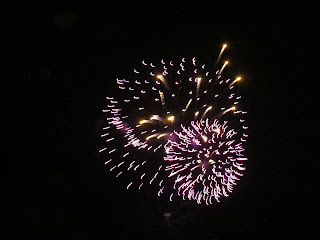 Poor Zach, he made it until about 10:15pm. Then he zonked HARD. Once the entire show was over and people were leaving Zach stayed wrapped up in his blanket asleep on our driveway. 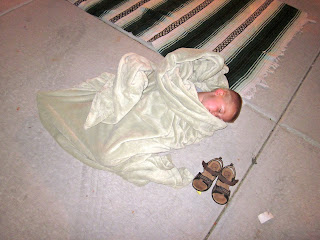 Here is part of the remains of the fireworks we shot off.....we had already filled our neighbors large trashcan! 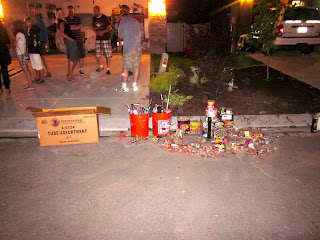 I wonder what next years 4th of July party will be like?! We LOVED having our friends and family around to celebrate our country's freedom.
Posted by Dustin and Jen Gray at 11:51 PM