When we woke up this morning we didn't realize EVERYTHING we would do today. We really only had one thing on the agenda.....professional pictures of the kids! We decided to return to Photoworks in Orem (where we had Logan's 1 year portraits taken). I am not sure what happened to our kids this morning, but NEITHER of them were cooperating very well for pictures. Jen wanted individuals of the boys and then some shots together. Apparently the kids had another agenda........
We started with Zach. The photographer had to coax him a bit and we got a few good pictures. I think we have a total of SIX pictures of Zach...yes only SIX. 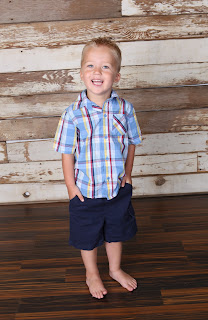 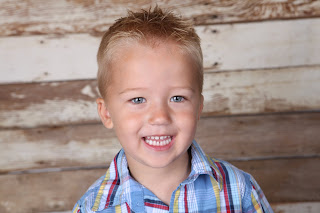 Next they photographer tried to get pictures of both boys together and Logan would have NOTHING to do with that. After 20 minutes of tantrums and tears, Jen found some rocks in a display and that caught Logan's attention. We threw them around like they were "balls" and the photographer was able to get NINE pictures of Logan, yes only NINE. 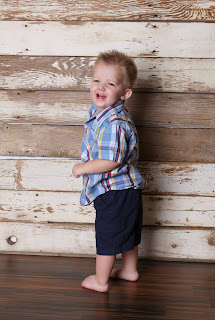 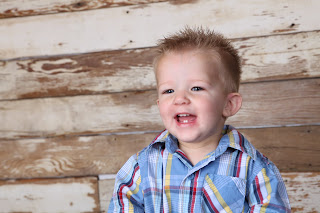 ...and that was it. Both boys would have NOTHING to do with pictures taken together. So 15 pictures and $79.95 later we walked out of the studio with a CD and one disappointed mom. We walked around the mall for a little bit, and picked up some needed items.

At this point we to head down to Spanish Fork to check out ThunderPig. We were in Orem...half way to Spanish Fork, so why not! When we arrived at Horvath Hotrods Zach was in heaven. There were TWO jeep Wranglers in the parking lot being repaired. He got inside the red jeep and checked it all out. 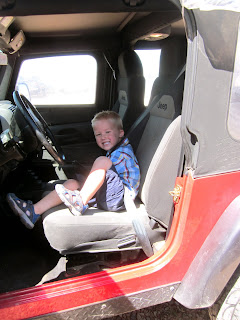 Now it was time for LUNCH! Where do we go for lunch when in Spanish Fork? McDonalds :) The kids had fun on the playscapes. We even splurged today and got ice cream cones. I was impressed that Logan knew now to eat an ice cream cone....no instruction needed! 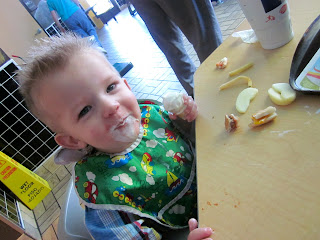 It was a warm day...probably upper 80's maybe even hit 90 degrees. We couldn't leave Spanish Fork without visiting the park with the water. We didn't pack any swimsuits for the kids, we were lucky to have an extra set of clothes (brought along because we had the pictures earlier in the day). So both boys stripped down to their shorts and loaded up on sun screen. They of course had a blast! 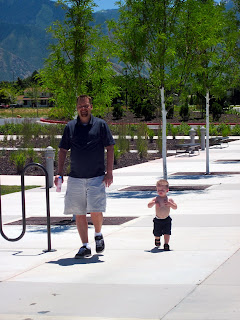 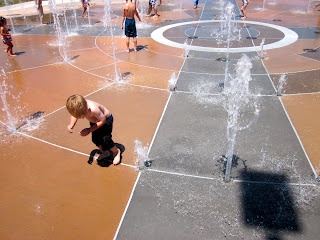 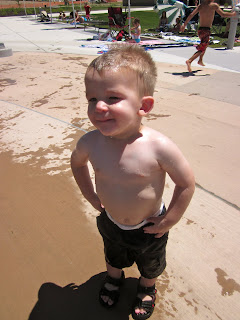 The kids fell asleep on the drive back home after the park. Once very one was up from naps we had dinner and then went on a bike ride. Jeff and Kristin came over and we headed out around 7:30pm. We each had a trailer for the kids. It was a great ride - we will have to take more of these bike rides! 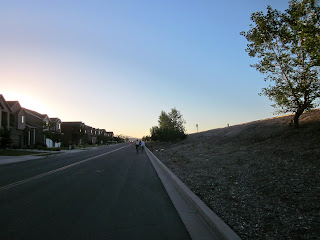 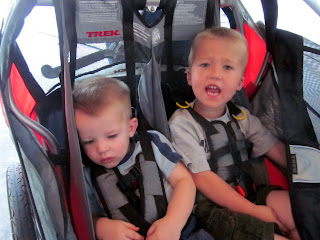 You would think our day was over right about now...but NO! Our neighborhood was having a "movie" in the park (by our pool). We all bundled up, sprayed ourselves with mosquito repellent, and grabbed some snacks. Everyone voted on watching the movie "Tangled". 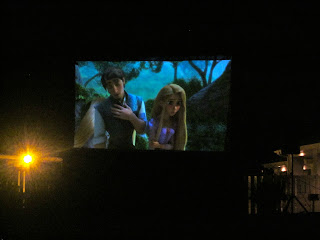 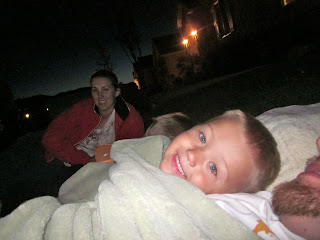 Both kids stayed awake for most of it. This was way past Logan's bedtime and about 10pm (half way through the movie) Jen took him home...he wouldn't settle down while watching the movie, but once home in is own bed he was out in seconds! Zach fell asleep with Dustin at the movie about 5 minutes before it ended.

That was our "whirlwind Saturday"...good thing we have Sunday to recover from it!
Posted by Dustin and Jen Gray at 11:41 PM