Today we had a free trip to the Canyons ski resort......and when we say free...we mean much much more than a free lift ticket! Apparently the company we work for are Canyon Club Members - as a form of recognition the company GIVES the membership to employees to use on a specific day basis. Yes - GIVES! Dustin received recognition from his management on the awesome job he is doing and gave us the club membership to use today! This worked out perfect for us, because Jen's parents were in town - so they could hang out with their grandchildren for part of the day while we went skiing! 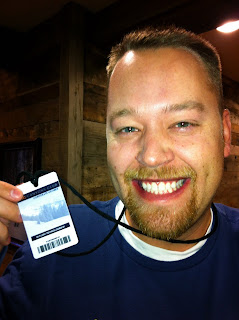 We arrived about 8:30am to the resort in Park City. Valet unloaded our car and showed us to the Alpine room - the exclusive area for the Canyon Club Members. They had a private locker room and a lounge with a complimentary continental breakfast. They even had a dedicated concierge person just sitting in the Alpine room waiting to answer our every question. The lifts didn't open until 9am so we had the concierge gives us some tips on what ski runs would be best for our skill level, then we headed out to check out the area. 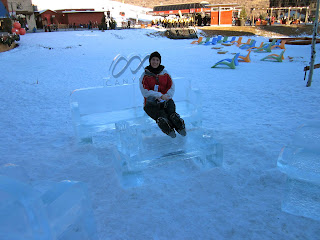 We soon learned that one of the BIG perks of being Canyon Club Members was you were able to go to the front of EVERY ski lift line! Oh Yeah. The employees at the lifts would see our membership badges and even go out of their way to get us to the front of the lines - you could easily tell everyone else was getting jealous....especially a few hours into skiing when the lines were getting really long. 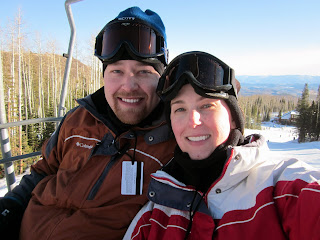 We stuck to the easiest slope for a good hour - once Jen felt we had mastered that, we tried moving on to a blue run. That run turned out to be ONE LONG RIDE! It took us almost an hour and a half to make it back down the mountain. 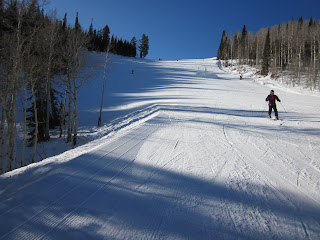 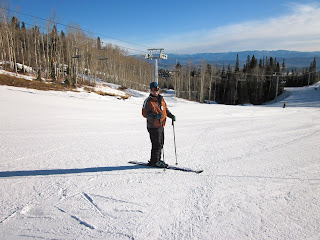 Dustin was enjoying the scenery and finding ways to have some fun. 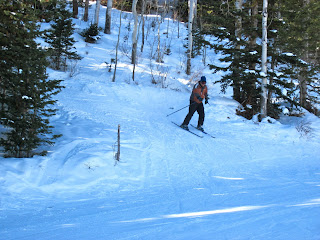 Jen on the other hand was taking her sweet time - the blue runs were a bit too intimating for her. We haven't really had much natural snow fall in Utah yet this time of year (yes - this is not normal), so most of the snow was man made...and really icy. We were used to the Utah powder snow....not this trip! Jen was excited to see this sign.... 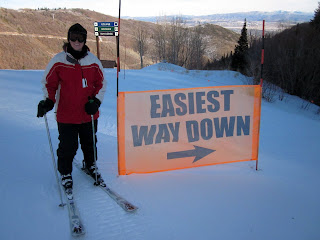 Once we made it back to the bottom of the mountain - Jen decided she needed a break. Dustin headed back up the mountain for the next hour - he was able to take the lift up THREE times since he didn't have to wait in any of the long lift lines! After his hour he decided he was done for the day as well......we both aren't exactly in tip top shape ;)
We both put up our feet and had some hot chocolate for a moment of relaxing. 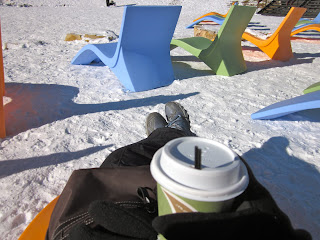 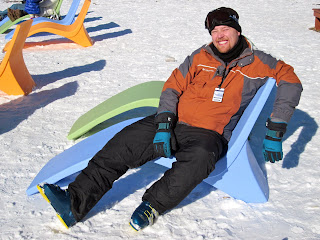 We headed back to the Alpine house, let them know we were done for the day. They took all our gear out to our car and offered us some drinks. It is going to be hard to go back to the Canyons ski resort again unless we have the Club Membership to use....VIP all the way!
Once we got home we learned the kids had a complete blast with Grandma and Grandpa Twogood - they watched movies and went to the Harley Dealership in Lindon. The boys love going to that Harley dealership because they have a toy ride on bike that is free - no quarters needed. We were able to make a great Lasagna Christmas Eve dinner and then bundle everyone up to go out on a drive to see the local Christmas lights!
Posted by Dustin and Jen Gray at 2:26 PM