Pets are family members too

**This post contains some 'graphic' images...if you can't stand blood - don't read it**
We have two cats. Aussie who is 10 years old, which we adopted when he was a kitten a month before we got married. Sammie who is 9 years old, we adopted when she was a kitten thinking she would be a great 'companion' for Aussie. The two cats really never had the ideal brother/sister relationship. Of the two cats - Aussie was our favorite...the more laid back cat. Sammie ended up being the spastic cat that had a love/hate relationship with everyone.
For the past couple of years (yes...YEARS) one of our cats would randomly spray on the walls in our house. Not all the time...just randomly. We always figured it was Aussie, you know...a male cat marking his territory. We could never catch the guilty cat in the act. A few weeks ago we came home to this... 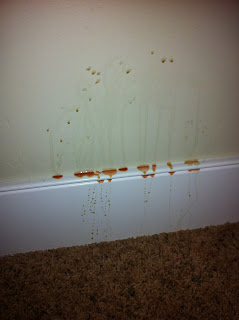 Yes - that would be BLOOD in cat urine on our master bedroom wall. It was almost like the guilty cat had to make it obvious for us to see it. Well, we flipped both cats over so see which one had blood on their fur and guess which cat it was? Not Aussie, it was Sammie. Our poor kitty had a bad UTI.
Now remember our spastic Sammie? We actually had a vet tell us one time when we lived in Austin to not to bring her back because she is SO HORRIBLE at a vet's office. So we knew it wouldn't be a fun experience to get a UTI looked at with a vet here in Utah. Dustin clipped Sammie's back toe nails and headed to the 24-7 vet hospital (it was a Sunday). 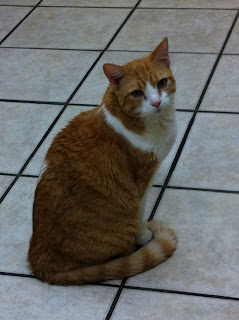 $300 later the vet agreed she had a UTI - what urine they could obtain from Sammie spraying on the vet (yes, literally) confirmed the infection, but also ruled out any type of cancer or other concerns. Sammie was given some antibiotic injections and was a very happy laid back cat for a few days. The vet even called us a few days later to ask how Sammie was doing (first time we have had a vet call to follow up)....she seemed perfectly fine. No more pissing on walls, and from what we could tell no more blood in the urine.
About three weeks later when we returned home from work on a Friday - we found the blood stained urine spray on our master bedroom wall again. We knew that wasn't good. Dustin took Sammie back to the same 24-7 vet hospital on the following day. They sedated Sammie and did an ultrasound of her bladder to figure out what was causing the infections. Here is what they found... 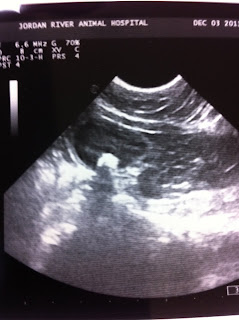 That would be a 1/2 inch calcium oxide 'stone' in our cats bladder. Calcium oxide is very hard, sharp and does not break down - it just keeps growing bigger. This 'stone' in our cats bladder was obviously too large to pass, but was not blocking her urine flow. This 'stone' was moving around in her bladder constantly scraping the sides and causing internal infections. The only way to eliminate this was surgery to remove the 'stone'.
So after a discussion on what to do - we decided to fork out the $$ to get the surgery to eliminate this unnecessary and completely treatable issue. Blood work was done to ensure all the internal organs of the cat were in good health and surgery was scheduled for the following Thursday. Monday the vet called and said the full urine analysis came back and her bladder infection was REALLY bad and she needed another antibiotic injection today so she could still have surgery on Thursday.
Thursday came and Sammie had surgery. The vet kept us updated - everything went as planned. When the bladder was opened to remove the 'stone' the entire lining of the bladder was really bruised - the vet felt it would take a few weeks for Sammie to completely heal from the damage of the 'stone'. Sammie came home on Friday and was hooked up with some great pain killers for three days. 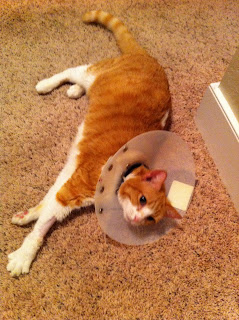 We kept her cone on for a full week to allow her abdominal incision to heal. Three weeks after surgery we have noticed a remarkable difference in how our cat behaves and the luster of her fur coat! If we only could speak the language of cat we could have solved this issue much much earlier - that 'stone' had been inside her bladder and growing for a few YEARS. Where is Dr. Doolittle when you need him?
Posted by Dustin and Jen Gray at 9:31 PM