Today our work hosted a "family outdoor picnic". It was suppose to be 97 degrees today - YIKES! I busted out the sunglasses for the kids....they both enjoyed wearing them. Check out Mr. Logan: 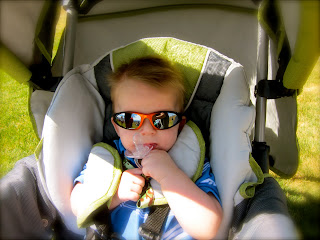 Luckily the people from work that organized the picnic got smart and had as much as they could under huge tents. They catered Goodwood BBQ, had ice cream, snow cones, cotton candy, kid games, bouncy houses, and of course a dunk tank! As we were getting unloaded from our car Zach immediately saw the bouncy houses (dinosaur themed) and that is where he wanted to go first....and that is where he wanted to stay! He wasn't too fond of the actual bouncy house, but he LOVED the bouncy slide. He felt so accomplished that he could climb up the backside which had the ladder and slide down himself. He was getting kind of bossy to the kids around him too ;) 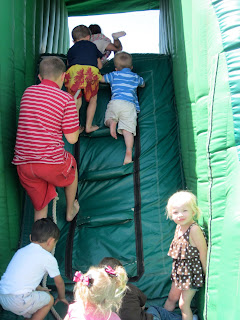 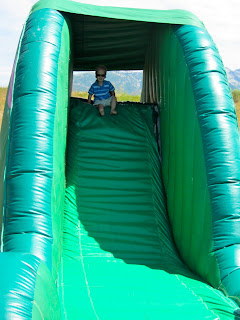 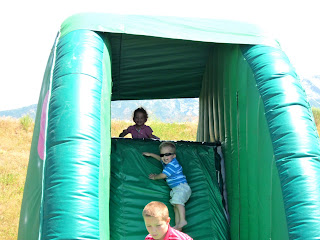 After about 20 minutes we wanted to venture on to other things at the picnic -- but Zach only wanted his slide. We took him over to the game tent (meaning we wanted some shade) and he wasn't too thrilled. We made him fish up a duck, knock down some trolls, and attempt a ring toss. 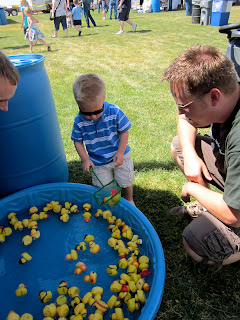 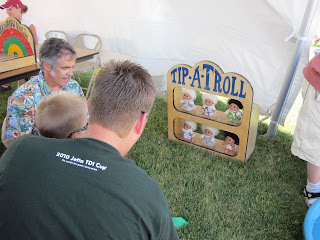 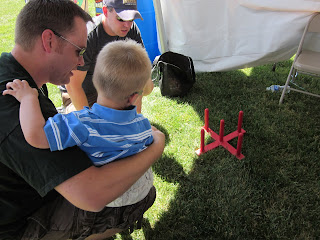 Next stop was for some of that catered Goodwood lunch. I didn't get any pictures of that....but it sure was yummy! By now it was time to hit up the dunk tank. Jen's boss (up three levels) was taking his rotation in the tank so we HAD to try and knock him down. We also didn't get any pictures of THAT! Dustin and Jen both weren't able to hit the red target to make the boss fall in tank....but we did get Zach to actually "push" the red target...so the boss went down in the water anyways :)
At this point the fire department showed up. They got out everything for the kids to see and play with. We were proud that Zach took his time exploring the fire truck. He has worn his "junior firefighter badge sticker" all day -- he even made us put it on his pajamas tonight! 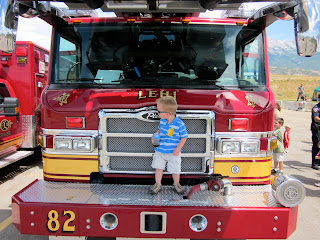 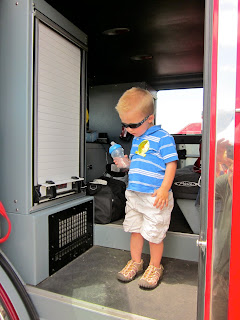 Both kids fell asleep on the way home. We were laughing at the way Zach looked -- that is a sugar daddy in his hands. He felt asleep eating his candy! 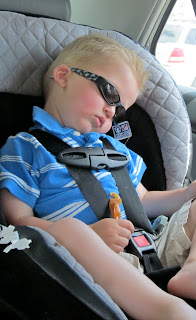 Posted by Dustin and Jen Gray at 2:56 PM