We headed to Colorado to hang out with Dustin's family for a few days. Since everyone in his family is spread out (one sister in North Carolina, one sister in Idaho, two brothers in Colorado) we realized we hadn't been back to Colorado with the kids in about two years. We scored a great deal on some southwest tickets (why drive 8 hours with TWO KIDS when you can fly in 1 hour?) and decided to rent a large 8 passenger vehicle to help drive all of us around (Us, Dustin's parents, his two brothers...grand total...8 people). Your choices in vehicles of that size are a minivan or a large SUV (suburban/tahoe/expedition). We had some credit card points that would get us a free minivan rental - upgrade to a suburban from the credit card points was $180 for the trip...eh, might as well go for the "free" vehicle. Jen figured Dustin could sweet talk his way into an upgrade....boy was she right! Dustin talked Alamo rental into giving us a brand new Tahoe for $60. Yes, a $300 upgrade (so they say) for only $60 for the entire 5 day trip. SOLD! Now I am in love with a Chevy Tahoe...it was SO ROOMIE. I could sit in the same row as my two kids and not be wedged in between two car seats. All the drooling I did during the trip over that SUV and I didn't even get a picture of it!
Okay now back to the trip....so now you know we were cruising the streets of Colorado in style. We had a blast (of course!) and stayed super busy. We visited the "farm" in Fort Collins. Zach and his cousin Korbin had fun going around and feeding the animals. 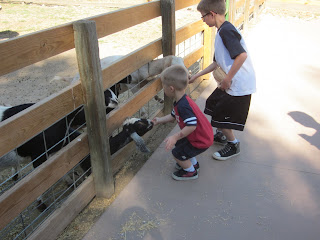 Logan had fun playing with the pumpkins: 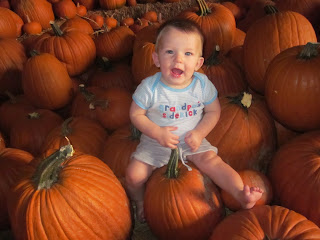 And we had fun smiling at the camera: 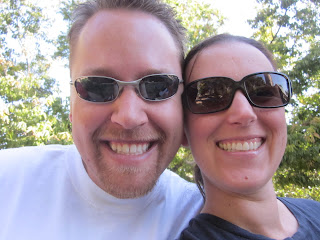 We also found lots to do at Dustin's parents house. Dustin's brothers had their work trucks at the house and they were hauling a mini bulldozer for their construction job the following week - guess which little boy was in HEAVEN?!?! 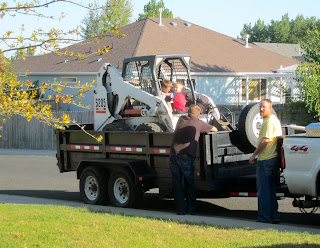 Zach was glued to his Uncles after he realized they had a mini bulldozer. Here is Zach with his Uncle Eric: 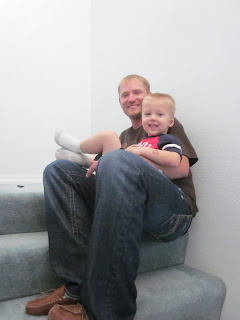 There was also a trampoline to jump on: 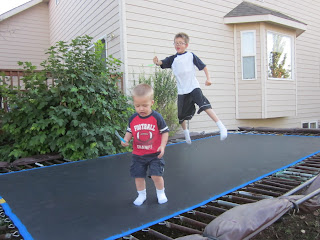 Logan verified the sticks in Colorado tasted as good as the ones in Utah: 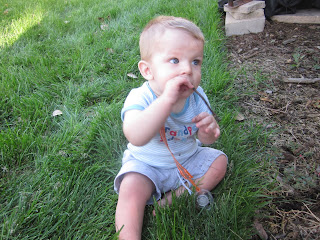 The weather cooperated so well, we were able to eat outside on the back deck several times. 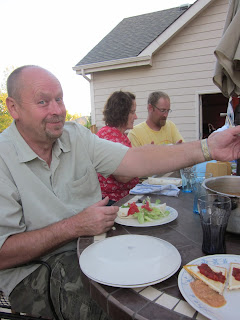 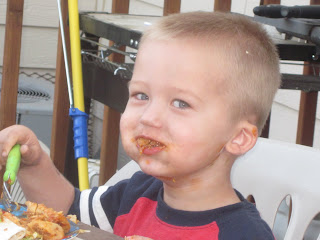 Logan helped with the dishes every chance he got: 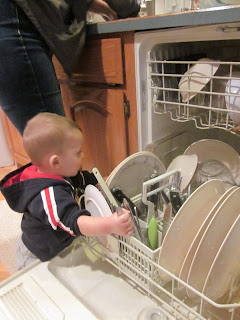 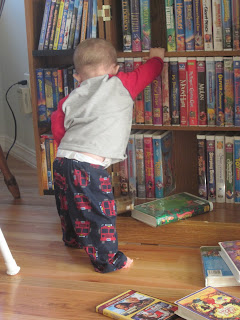 We also went bowling. When ever we are in town we always go to this particular bowling alley in Greeley. This is the first time they had the disco thing going on while we were bowling. Zach had never been bowling before (and was in dire need of a nap when we went) - but enjoyed himself. He had cute little bowling shoes.... 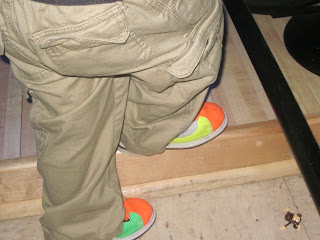 ...and he picked out his own pink bowling ball and walked it down and rolled it down to hit the pins! 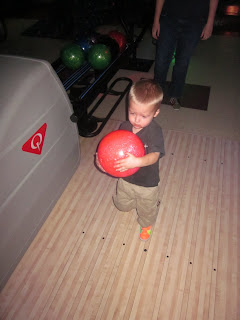 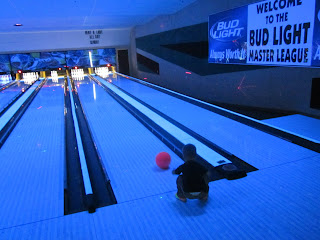 We WILL be going bowling again.

The next highlight of the trip was a fishing expedition at Dustin's cousins the Larson's! They live in Loveland on a lake. The lake is full of fish. They have several canoes and fishing poles and let us come over and have some fun! Our kids have never been fishing before...and the closest they have been to a large fish the Cabela's fish tank....so this was a real treat!

We first started off fishing from the dock. It didn't take long for Dustin and Zach to catch their first fish.... 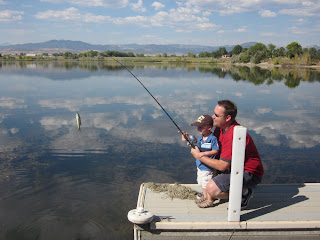 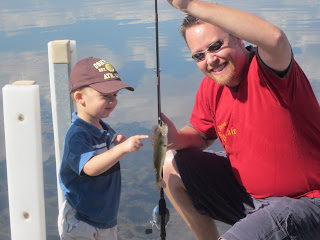 Then Grandpa Gray caught a fish and Logan was able to check it out...look how hard he is focusing/concentrating on that fish! 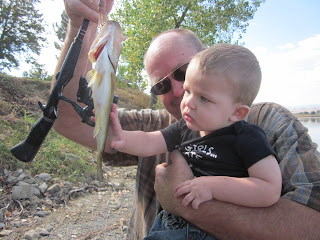 Then we decided to go in the canoes to find more fish. 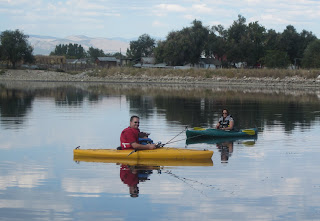 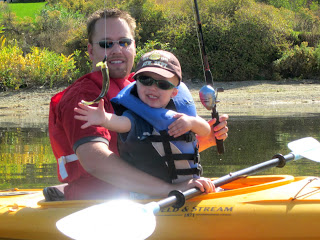 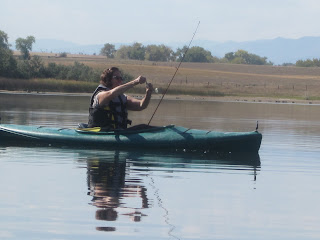 Jen tried to catch some fish....maybe she was just a bit too relaxed... 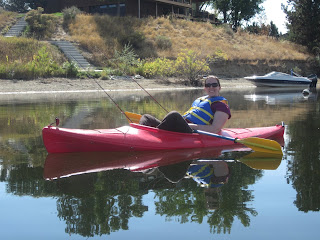 After about an hour Jen finally caught her SINGLE fish.... 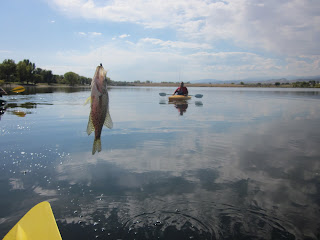 You always know you know the day was a success when this is what you see during the drive back to Dustin's parents house. 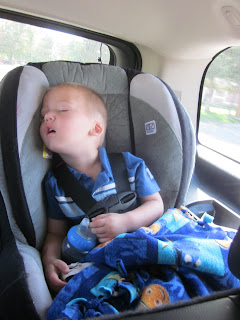 Before we headed back to Utah we were able to tour the Denver Mint. Jeanette was able to get us "tickets" for the tour about two months in advance. No cameras allowed in that place so I have no pictures :( The Denver mint does pennies!! Everyone loved seeing the process of how they were created, stamped, and cleaned.

Last stop before the airport was lunch at Casa Bonitas. This place served Mexican food and had a great ambiance for entertainment. There were cliff divers, caves, bridges, arcades....you name it...every little kids dream come true. Dustin remembers going to this place in Denver when he was a kid and is always talking about Casa Bonitas. We were finally able to make it to this restaurant during this visit. 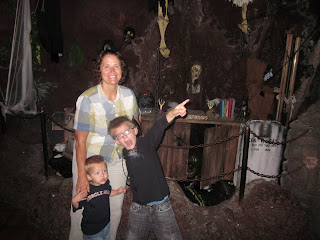 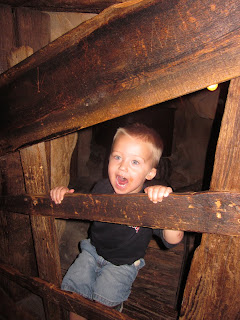 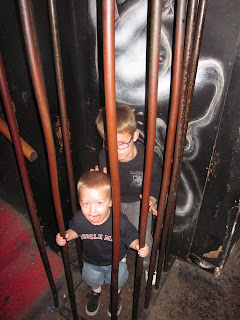 A little bit of sibling jealousy going on in this photo.... 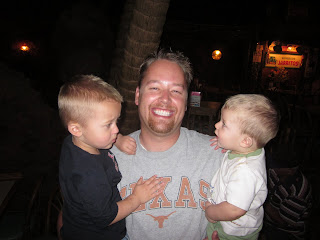 And sadly our trip has come to a close. The boys are already asking when the next plane ride is going to be.... 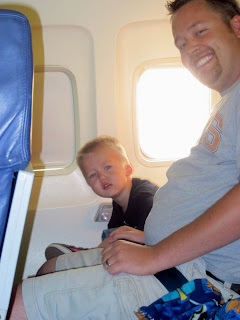 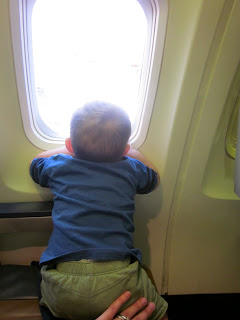 Posted by Dustin and Jen Gray at 8:14 PM

Colorado was a blast.. We had so much fun!