Halloween 2009 was memorable for us because this was Zach's first year actually being able to run from house to house saying trick or treat and getting candy in return! We were also lucky to be able to spend Halloween with Jen's Mom and Dustin's Dad. After carving pumpkins we threw on Zach's costume (a quirky little three eyed alien) an hit the streets to see what kind of goodies we could score. 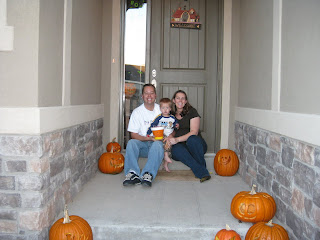 Thats a lot of pumpkins huh! 5 Large / 3 Small.. and we carved all but one! Dustin saved one so he can impress Jen with his home made pumpkin pie making skills.. We'll see.. ;) 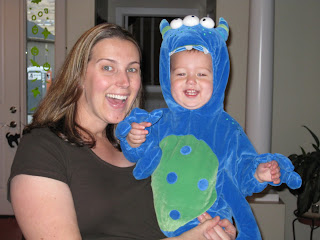 Zach already speaks "alien" quiet well, so this was a perfect outfit for him. He loved it and would giggle every time he caught a glimpse of himself in a mirror. 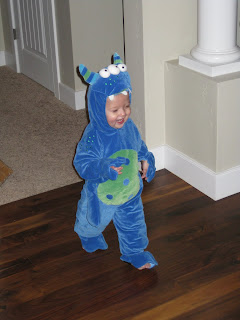 Hard to tell, but he actually has 4 arms! Quite handy if you ask me! 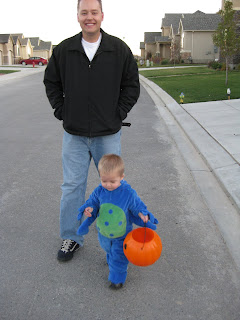 Zach ran from door to door.. hardly skipping a beat. He started out a bit shy, but by the end of the night he was saying "Tri-Tree!!" (Translation: Trick or Treat!).. then he would pick out his candy and say "THAY" (Translation: Thank you very much kind sir or mam! This is my favorite candy!) 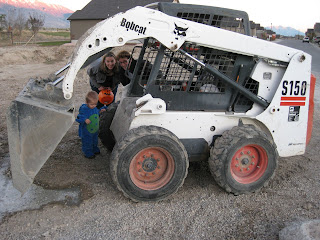 Along the way we came across a Bobcat.. Zach absolutely loves tractors.. He started saying "Tractor" months ago and now says it any time he catches a glimpse of a tractor of any kind.. pretty funny.. Well after about 10 minutes of him running around checking out the tractor, we headed to the next house. 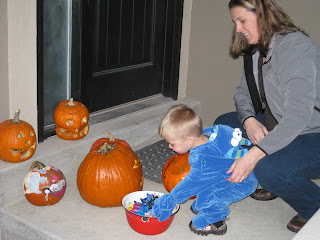 These were Zach's favorite houses because he could take his time to pick out the perfect piece of candy.. The only problem is that once you pick out the perfect candy, you really don't want to have to put it back into your bucket.. you want to eat it! But after eating a few suckers he figured it was ok to part with a few candies after visiting the candy buckets. 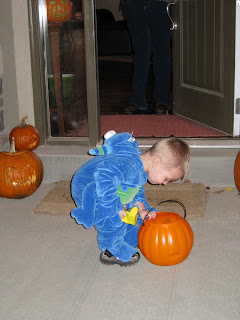 Once we made it home, Zach proudly showed us all of his prize candies and toys he had collected. 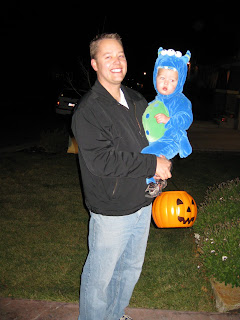 Zach was pooped out, but only until his next sugar rush. :) 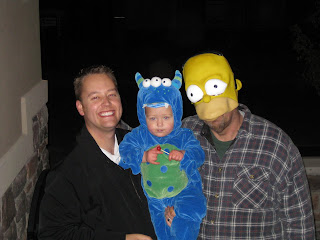 Even Dustin's Dad got into the fun while walking Zach around.. Doesn't he make a great Homer? We think so.
Well, even though Halloween came and went way to quickly this year, we had a blast taking him around the neighborhood, and we know for sure that Zach is already planning out which candies to collect next year. And Dustin has noted each and every house that gave out full sized candy bars, so we won't accidentally miss them. :)
Posted by Dustin and Jen Gray at 11:07 PM