We bought tickets in our company's suite for Disney on Ice. Perfectly planned by us - only two paid adults, the kids were free, we had the whole suite to let Zach run around in and couches for Jen and Logan to lounge on. We show up at will call to get our tickets AND THEY WERE NOT FOR THE SUITE. Apparently for Disney on Ice the suite our company owns had blocked views. So the Energy Solutions Center did the best they could and gave us 8th row tickets...but only two tickets. Zach and Logan had to sit on our laps. We had to find a place to "check" Logan's car seat carrier. We were a bit frazzled before the start as our leisurely planned show was now not so leisurely.
We chose this particular Disney on Ice for our first because it was themed "Worlds of Fantasy" - featuring Cars, Lion King, Little Mermaid and Tinkerbell. All the other recent Disney on Ice shows have been all about princesses and we were not about to take our boys to a princess themed Disney on Ice. I think we were secretly more excited about the "Cars" portion of the show as Zach LOVES that movie. They started the show off with the Cars portion - and it happened to be the SHORTEST portion (yeah we were disappointed with that). 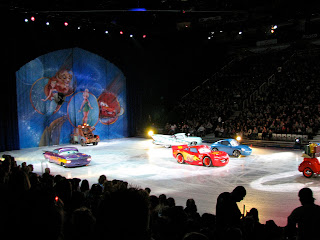 This was Zach's face most of the show: 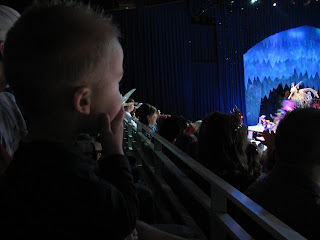 During intermission Zach decided he was going to go down to the ice - we didn't let him, but that of course spurred a 2 year old temper tantrum. 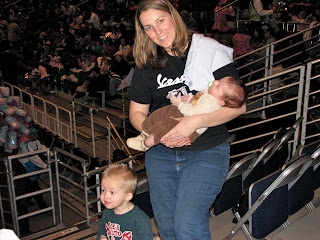 So after the intermission there was only the Tinkerbell portion of the show left...Zach really didn't want to sit any longer.....until the did the finale and saw all this! 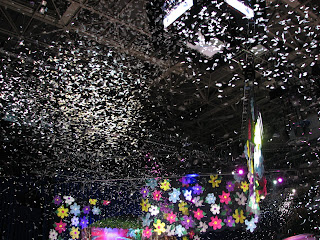 I think future Disney on Ice shows will be a few years away.....
Posted by Dustin and Jen Gray at 10:04 PM

still looks like the show was a lot of fun.. I'm sure in a few years zach will want to sit threw the whole thing.

I have always wanted to go to this! I have heard though that is geared more to girls so I have never bothered. Sound like I should save the money and send Jeff and the boys to Monster Truck Jam. I guess I could live with a quiet house while they are gone.