Visit to the Sacramento Zoo and Fairytale Town

Today we headed to Sacramento to check out the zoo and a place Jen and her brother went to as kids called Fairytale Town. If you've never heard of Fairytale Town, don't feel bad, neither had I.. Its a huge park that was created to bring fairytales and nursery rhymes to life, and it was awesome.


The Zoo
Within minutes after crossing through the entrance we came across a tortoise being walked by a zookeeper! Janice and Zach picked a flower and fed it to him! Zach thought that was pretty cool. 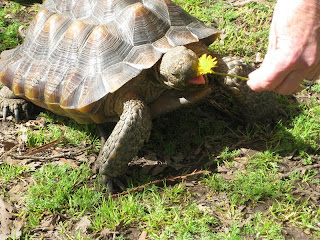 Next was the reptile building where Zach came face to face with a creature with a bigger smile than Zach has! Can't tell what Zach is smiling next to? 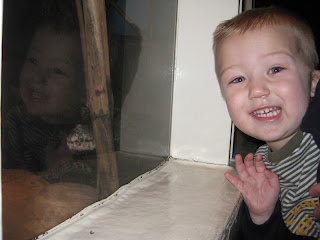 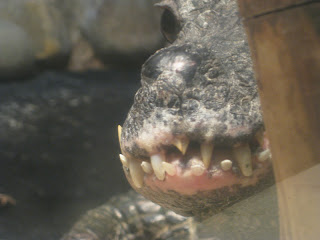 After seeing all of the cool reptiles we visited some odd monkeys called Sakis. They were making loud whistling noises as they swung around.. We could hear them all the way across the zoo grounds! check out the video, you can hear them singing.

Along the way we came across this sweet dump truck.. Zach had to take a ride in it.. 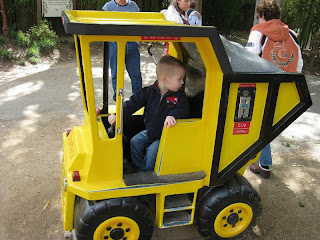 Jeepers Creepers! Oh I hate spiders.. Why did we take this picture? Zach doesn't like anything with multiple legs either.. he says "Eeeeeew!" And points at it.. Pretty funny.. Even does it for crabs and caterpillars.. lol. I'm assuming he didn't know he was taking a picture next to a 5ft tall spider. hah! 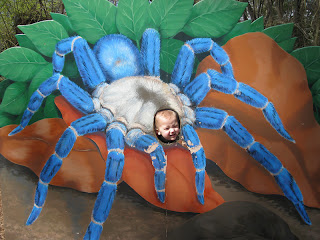 After we finished seeing all of the animals we decided to take Zach for a train ride! This little train took us all over the zoo.. It was fun.. As everyone knows, Zach loves trains. He was grinning ear to ear. :) 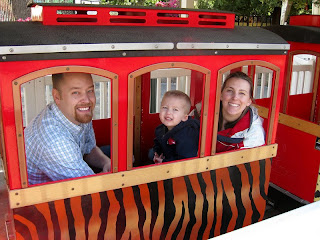 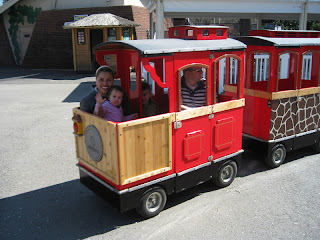 As soon as we walked into the park, we literally ran from attraction to attraction. There was so much to see!!

Some of our favorites were:

King Arthur's Castle, The Old Woman Who Lived in a Shoe, Farmer Brown's Barn, Cinderella's Carriage, The Crooked Mile, Jack and the Beanstalk, The Little Engine that Could, a block of Cheese (from Farmer in the Dell) and Alice's Rabbit Hole.. Most of the attractions had slides and squirrels for Zach and the kids to chase.

Here is Zach and Dad sitting in King Arthur's thrown. We need one of these in our family room. Sweet. The only thing I would do differently with it would be to add cup holders, a remote holder, and a mini fridge underneath it.. Because look at all that wasted space under the chair! heh heh.. 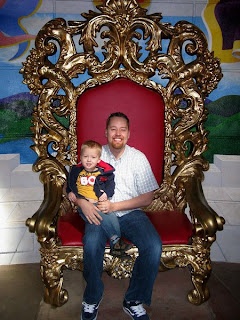 This was Zach's favorite attraction.. The old Mother Who Lived in the Shoe had a long slide that went down the tongue of the shoe.. It was way fast too! 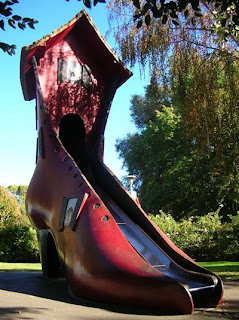 This is Zach and I on our first ride down.. Afterwards Zach only wanted to ride this on his own.. which was both terrifying and awesome at the same time. He had a blast. 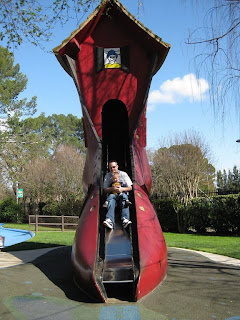 After we carried Zach away from the shoe slide, We came across a petting zoo with huge sheep in it.. They only let Zach pet them a few times before they moved away.. so naturally I just hung Zach closer! He would have been perfectly fine with me just tossing him into the cage, but I figured the park would frown on that.. heh heh.. 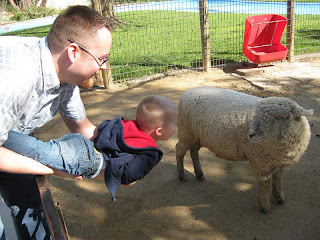 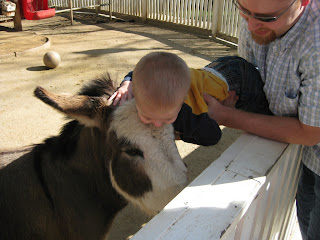 Zach had fun checking this tractor out at Farmer Brown's barn.. I even taught him how to kick the tires and point at the engine so that one day he'll ask "how many cylinders does your tractor have? 4 or 6?" heh heh 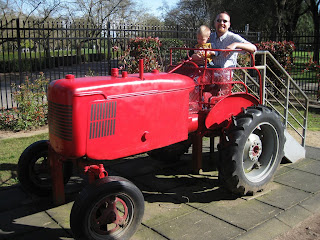 There was a fun maze built in the center of a thick wooded area of the middle of the park.. The trail was made from raised cement which was arched and curved with different contours.. Zach and I ran through this twice.. The sign said the path was only 1/8th of a mile but it felt longer.. though that could be because I was holding Zach in the air through most of it or swinging him out as far as I could get him during tight corners.. At the end we still didn't know what this nursery rhyme was supposed to be about so I looked it up after we got back home.. Here is the rhyme... 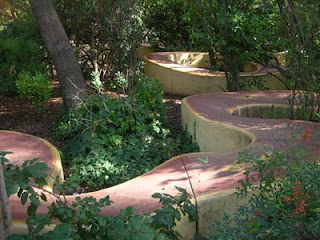 Here we are at Cinderella's carriage.. Little London played the part of Cinderella, and Zach was prince charming.. That makes Garrett and I the doorman and horse poop sweeper. 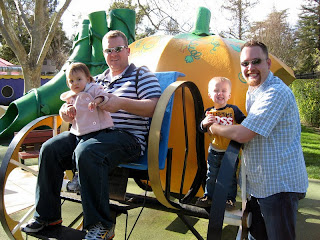 This is the Jack and the Beanstalk slide.. Zach and I loved this one.. we went down face down, face up, feet first, feet sideways.. it was awesome because it wasn't too fast and was wide enough to get creative. 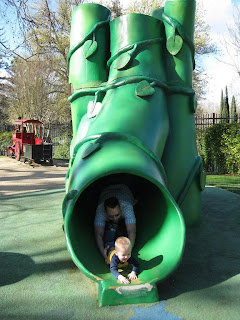 Even Logan got in on the fun! He had on his super slider blanket.. it made him friction free so he could slide faster. hah! 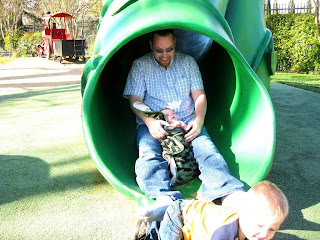 Ok here's Logan's victory face after his first ride on a slide! 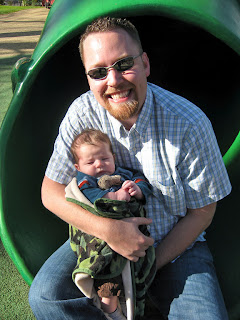 This was a big block of cheese from the Farmer in the Dell nursery Rhyme.. It was fun till the fat guy got stuck in the smallest cheese hole.. 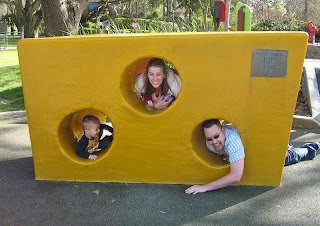 Ever wondered what the rabbit hole in Alice and Wonderland really looked like? Well here's your chance!! It looks like a yellow slide!! :) 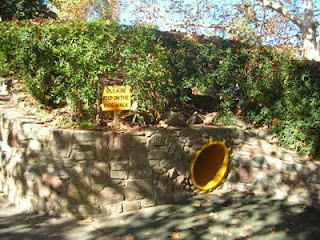 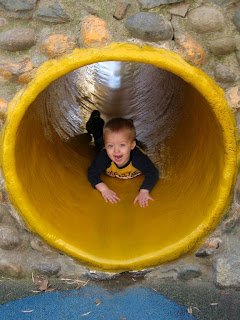 Instead of figuring out how to get out of Wonderland the way Alice did in the story, Zach simply climbed back out of the hole!! Genius!! 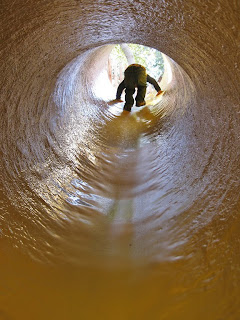 We had an absolute blast.. Jen's Dad said "It was hard to tell who had more fun.. Zach or Dustin?" Well I can tell you this.. I loved every minute of this day spending it with my family.

Posted by Dustin and Jen Gray at 9:40 PM